Located in a spot where the Seomgang River,
17 km to the west, meets the Samsancheon Stream

With a spacious sandy beach, oddly formed rocks, and dense old trees in harmony around the dark
blue rivers, the area commands a fine view with 40- to 50-meter-high rock cliffs surrounding
the area on either side of the rivers. 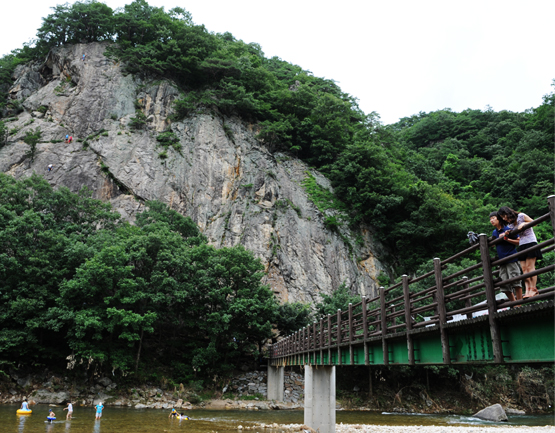 “Once the Han River is passed,
where is the Seomgang River?
Chiak is just around the corner”

As “Gwandong Byeolgok” praised its magnificent view, the area is made even more picturesque with strange rocks and steep peaks floating a shadow in Seomgang River’s blue river water and the spacious sandy beach and clean water of Samsancheon Valley.

In the vicinity are various cultural relics such as Heungbeopsa Temple Site, Monument for Great Master Jingong, and tombstones for General Won Chung-gap and Jo Eom. The area was untraveled for a long time as it was used as a ranger training ground, but this served as an occasion for its landscape to return to the virgin land of ancient times; it still maintains the purity of its high mountains and deep valleys because the upper stream of the Samsancheon Stream remains undeveloped.

Later, the Ganhyeon Tourist Area was designated as a tourist spot for the first time in May 1985 by the government, and has been in operation until today, furnished with lodging, campsites, and mountain trails; it is spotlighted as a summer resort for young people and families.

If coming from downtown Wonju : Take city bus or taxi

When taking city bus No. 52, get off at Ganhyeon Rail Park and walk for about 5 minutes to arrive at Ganhyeon Tourist Area

When taking a bus at Donghwa Station, ask the driver “Does this bus go to Ganhyeon?” because buses bound for Wonju also stop there.

When using expressway by car